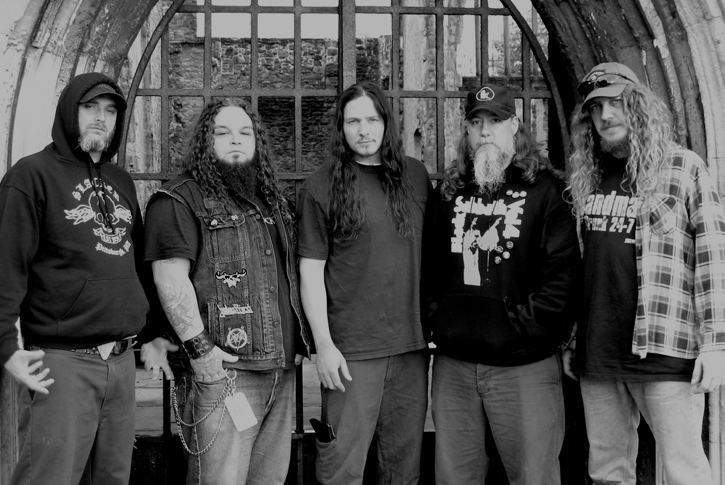 In 1994, east coast rockers Godspeed were taken from their South Jersey basement and thrust into Electric Lady Studios to record their Atlantic Records debut, Ride. Featuring future SOLACE members Tommy Southard and Rob Hultz, Godspeed’s major-label run included a cover of Sabbath Bloody Sabbath for “Nativity In Black: A Tribute To Black Sabbath” which featured none other than Iron Maiden’s Bruce Dickinson on lead vocals. The video for their single “Houston Street” aired on MTV and tours of the U.S. and Europe with Black Sabbath, Dio, Sugartooth and British doomsters Cathedral followed.

Godspeed dissolved after just one album, but following stints as lead guitarist for Sugartooth and Slap Rocket, Tommy reignited the band in 1996 with Rob and former Glueneck singer Jason, naming the revamped outfit SOLACE. With the intense riffage of Godspeed, Glueneck’s raw power, and a dash of ferocious drumming thrown in for good measure, SOLACE’s music found equal footing in the
Rock, Metal, and Hardcore genres.

In 2003, SOLACE finally cemented their line-up when they added former Lethal Aggression drummer Kenny Lund and second guitarist Justin Daniels. With the dual guitar assault of Southard and Daniels, the wall of thunder onslaught of Hultz and Lund, and Jason’s otherworldly vocals, SOLACE became an uncompromisingly heavy force that must be heard to be believed.

CMJ called SOLACE “wicked and devastatingly heavy”. Metal Maniacs described them as “a solid, pure heavy rock band free of fashionable pretense, with an appeal to anyone who can still appreciate such a concept in today’s cluttered, sometimes confused musical climate”. Their debut album Further was described by Kerrang! as “irresistibly catchy and thoroughly terrifying”. 13, the band’s second album was labeled, “as stomach-turning and power hungry as vintage Sabbath” by the All Music Guide, thus transcending the expectation of the “sophomore slump”. In fact, there was no slump at all. SOLACE ’s 2007 release, The Black Black, was described by Slam-Zine.de as “simply perfect in its entirety,” while John Pegoraro of StonerRock.com said, “If I had to describe The Black Black in a word, it would be one long girlish shriek of joy.”

In addition to their amazing recordings, SOLACE is an intense live act complete with flailing hair and face-to-face dueling guitar solos. Those who have seen them perform can attest to the fact that they give everything on stage. There is a reason why the band has acquired as strong a reputation for their performances as they have for their recklessly hard living: you’ll enter a heathen and leave a convert. It’s that simple.

2006 saw SOLACE play the sold-out Roadburn Festival in Tilburg, Holland. They were so well received that in May 2007, they returned to Europe with fellow doomsters Orange Goblin to unleash the brutality that European fans had been craving. While playing at The Underworld in London, Terrorizer Magazine gauged the sheer aggression of their sound and stage presence as “…somewhere between Alabama Thunderpussy on meth and Municipal Waste on 16rpm – an extremely acceptable and potent proposition.” Since returning from Europe in June 2007, they have stepped back into the studio to perfect their highly anticipated sixth release, A.D. for their new label, Small Stone Records.

Nine years and five albums since their formation, SOLACE has proven impervious to the ravages of time and worthy of the respect and praise that they’ve received for their passionate motivation, energy, and raw talent. Clearly, there is no end in sight to their exquisite reign of terror.