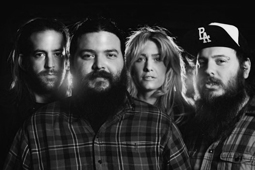 After touring the country relentlessly for 5 years, the singer of a Pennsylvania hardcore band decided to stop everything, lock himself in his basement and turn a new page. Armed with a 4 track and a life long obsession with Neil Young, Black Flag and (of course) Sabbath, he re-emerged two days later with the blueprint of what would become Backwoods Payback. With the help of a few like minded individuals the band went from the blue print stage to a fully operational Death Star of riffage before the end of that year.

Staying true to the D.I.Y. sensibilities of their past, Backwoods Payback started touring the country, recording and self releasing eps and full length albums, as well acting as hosts and goodwill ambassadors of sorts to touring bands from all over the world. Spreading the word one song, one town, one person at a time the band wouldn’t stop. Small shows led to bigger shows. Weekend Tours turned into month long jaunts. And after a few years and countless trips crisscrossing the country the dudes and gal found themselves sharing the stage with everyone from The Hidden Hand and Exodous to Gwar and Cradle Of Filth, kicking ass and taking names the whole way.

Its been a long and wild journey so far but the best and loudest is surely yet to come. In the spring of 2011 Backwoods Payback will release their first full length for Small Stone Recordings and hit the road with the machine behind them for the first time in their lives. These Backwoods folks aren’t forming an army; they’re building a family. All the while staying true to their motto…drop out to live.