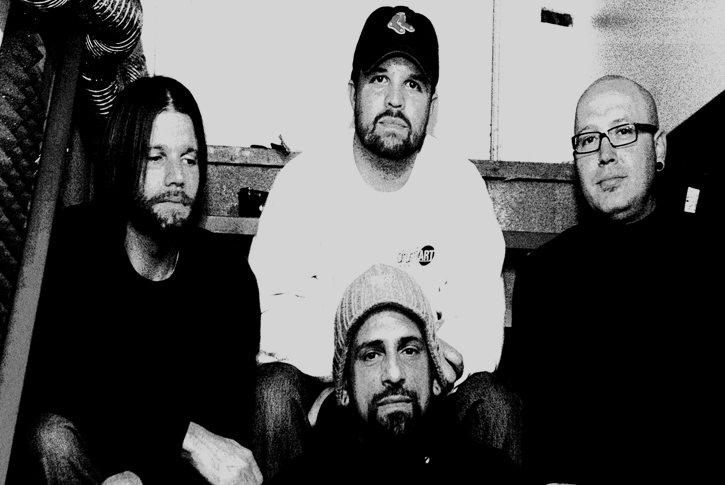 To some, amplification is more than a way to mark territory � it�s a claim to divinity. Upstate New York�s GREATDAYFORUP have nurtured this concept since 1999, with a reputation for stunning live performances at Stegosaurus-killing volumes, their bruising, riff-encrusted wares a welcome occupying force in a local scene laden with drunken, overly-sensitive males. The band�s first release, Godlovesasinner, earned nationwide acclaim on the stoner rock circuit, and once on the road their roiling, tempestuous dirge left all comers stunned in the aisles, searching for loose change and redemption. Sound Monitor�s Matt Harris compared the band to �Helmet playing QOTSA rock with Pete Stahl on vocals,� while Francis DiMenno from Boston�s Noise Magazine heralded GDFU�s ability to �hijack your autonomous nervous system,� and their �hard charging, minimalist manifestoes.� Indeed, GDFU founders Mike Vitali (guitars) and Michael Langone (vocals) understand that less is more, that there need only be a short and deafening agreement between the death-dealing hooks and wrenching storyboards to convert the agnostics.

This ability to make rhyme pay caught the attention of Virginia�s Underdogma Records, which released the band�s murderous split CD with the legendary Solace in 2004. This is where the band�s signature style morphed into its most devastating form, the delivery more corpulent and tighter than a tick on a stud bull. Why, the lumbering juggernaught �Soul of a Motherfucker� alone was enough to shake even the sickest fruit from the Tree of Life. Accordingly, the tour schedule grew like a late night moan, and GDFU rose to the task, sharing the stage with Scissorfight, Superjoint Ritual, Dozer, Weedeater and Bongzilla to name a few. Appearances at the CMJ Music Festival, Emmissions from the Monolith and South By Southwest followed, where the band soaked up even more exposure by throwing down with established class acts like Eyehategod, Raging Slab, God Forbid, The Donnas, Billy Idol and the New York Dolls.

During this tirade, the band was scooped up by Scott Hamilton�s Small Stone Records out of Detroit, a company that knows all about heavy sport with titans like Men of Porn and Alabama Thunderpussy�s Erik Larson in the stable. The September 2005 release of Flores De Sangre on the label offers a grinding richness that habituates the senses even as they are threatened with extinction by a rhythm section they could have used at Normandy (courtesy new bassist Brendan Slater and drummer Jim Feck). �One hell of an album,� said John Pegoraro of StonerRock.com, while Allmusic.com�s Ed Rivadavia claimed its riffs are �so dense and sludgy they could level city blocks.� And now, with tour dates in the works for 2006, GREATDAYFORUP are again poised to wreck the cosmos with their payload. Your beard will grow several inches with one listen (same goes for you ladies). The stuff is munificent, car-crushing and concentrated toward the task at hand, that task being to conquer nations, salt their fields and mock the lamentations of their weak. Call it what you will. Doom is in the room, baby, and the long stick goes boom. So mark your territory. It�s divine.