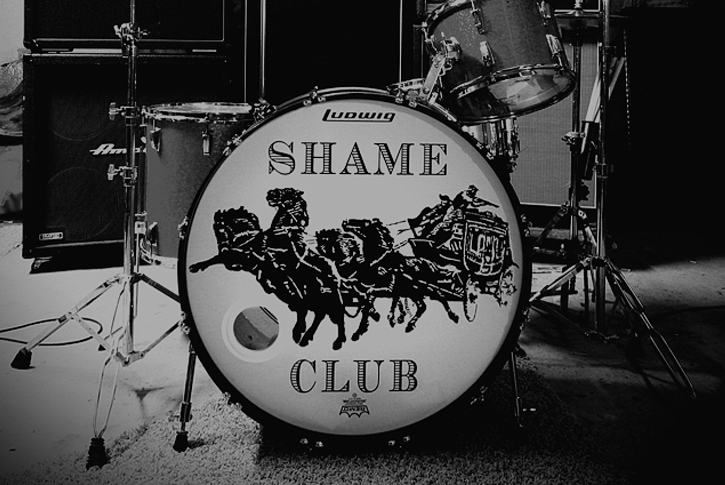 Shame Club is a ROCK-N-ROLL band. PERIOD. A real honest to god American ROCK-N-ROLL band. Like Aerosmith when they still did drugs, like Kiss before they took off their makeup or like ZZ Top before MTV. They may look like four guys on their way to a hot dog stand, but they will roll up in the shittiest van you’ve ever seen and flatten your club. Mixing a love for volume, all things 70’s and the punk rock ethos of Loud Fast Rules, Shame Club comes across as a thundering barrage of their influences. Think Aerosmith playing at the Ramones pace with the guitarist from Thin Lizzy sitting in.

Born on May 7, 2000, around the core guitar and vocals of Jon Lumley the band took its time to find it’s feet. A revolving cast of characters filling various positions in the band as they tried to find their voice. Andy White joined Jon on guitar in 2001 after seeing the band in its early incarnation about 20 times. Eric Eyster joined a couple of months later, after seeing them once. That’s when the sounds began to mesh. 2004 saw Shame Club release the first of what would be two self-released albums. 2005 found the band with a complete and solid line-up due to permanent addition of the heavy-handed Ken McCray on drums. 2005 also saw a more fleshed out second release from the band thanks in no small part to the immediate chemistry between Eyster and McCray.

Fast forward to 2008, the band has played countless shows since their line up solidified. Sharing the stage with such luminaries as Brant Bjork, The Makers, Electric Frankenstein & Jucifer. The sound is now as tight and bombastic, as it is loud and fast. The band has just completed their 3rd album “Come On” which will be their first release for Small Stone Records. Using the bulk of the last three years to write the material and taking more than just a long weekend to record it, the new songs are finally the fully formed ideas that band always knew they could be. Mixing just a hint of southern influence with their trademarked riff-heavy, eardrum-bleeding rock and roll this is the album the boys were destined to make. Keep an eye out for “Come On” in stores this Spring and for Shame Club’s explosive live show and shitty van in your town soon.