A THOUSAND KNIVES OF FIRE 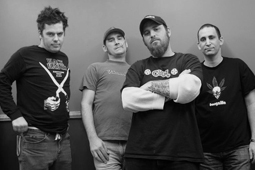 If there had been ashes from the demise of Halfway to Gone than A Thousand Knives of Fire would have risen screaming from them. But as HTG isn’t so much gone as on permanent vacation then A Thousand Knives of Fire is more like a diabolical plot by Halfway’s guitarist Lee Stuart and longtime friend & drummer Bob Pantella (Raging Slab,Monster Magnet). A plot to start a kick ass rock band who’s main focus would be on spreading the Gospel of Rock to a public that is desperate for something great. The reverend of rhythm Taj Briggles was quickly added on bass to preach the virtues of low end as well as Paul Wiegand who was enlisted for his unique ability at the guitar sermon.

Less than a year old and this quartet of Jersey’s finest have already been preaching the gospel on stages up and down the eastern seaboard. Playing with the likes of Bongzilla, Stinking Lizavetta, Weedeater, Moist Boyz, & Solace in preparation for their first US tour. It seems their goal of taking it back to the people has already begun to be realized. The list of the converted and the born again continues to grow. Look for these real giants from New Jersey to take it all the way gone with “The Last Train to Scornsville” soon to be released on Small Stone Records.