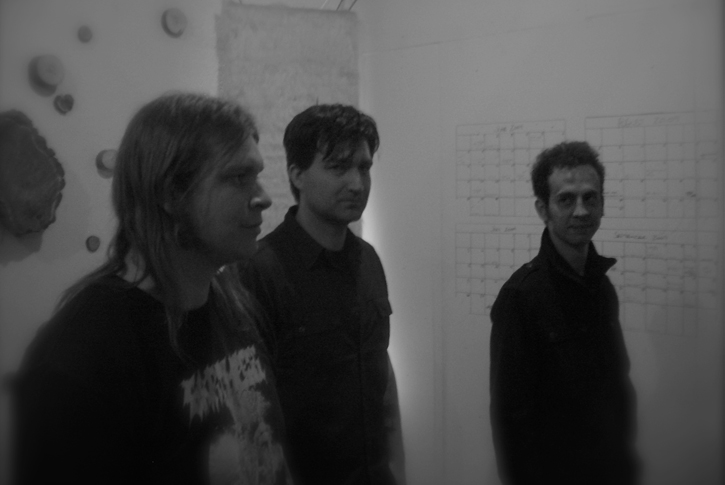 The Dwellers are on the threshold…again!

On the threshold of what, you may understandably inquire? World domination, the apocalypse, a slushy mission to the local 7-Eleven?

The answer may well be “all of the above,” but we think none is as important as the impending release of the Salt Lake City group’s hotly anticipated second full-length, Pagan Fruit (call us biased!), which is due to see the light of day through Small Stone Recordings in May of 2014.
The album follows in the still echoing sonic shockwaves of Dwellers’ enthusiastically received debut of 2012, Good Morning Harakiri, which saw the newly assembled trio of vocalist/guitarist Joey Toscano, bassist Dave Jones, and drummer Zach Hatsis pooling together their impressive prior musical credentials (Toscano with psych-metal adventurers Iota; Jones and Hatsis with doom/goth atmospheric bandits, SubRosa) with staggeringly powerful and memorable results.

Now, the terrible triplets are confident they can one-up themselves with Pagan Fruit: an album that both exceeds the lysergic power chord trip initiated on that first album, and expands the band’s creative horizons into realms heretofore unexplored.

So on top of the already multifaceted influences, both subliminal and overt, picked up by discerning listeners from Good Morning Harakiri — influences ranging from Hawkwind to Soundgarden, Monster Magnet to Captain Beyond, Sons of Otis to the Screaming Trees — the songs/seeds found on Pagan Fruit reveal novel, dynamically varied musical touchstones as far reaching as vintage Neil Young & Crazy Horse and Goat’s Head Soup-period Stones.

So take a chance and take a bite of this forbidden, Pagan Fruit, if you dare; let its sweet and sinful juice run down your chin as reality-bending tunes like “Creature Comfort,” “Son of Raven” and “Call of the Hallowed Horn” blow your synapses to blissful smithereens; then call us in the morning once you’ve properly grasped the, errr… “enormity of the object,” if you catch our reference.

Chances are, by doing so, you’ll have crossed that mysterious threshold alluded to above — whatever it may be! — and ascended to a higher plane of unique and imaginative sonic synchronicity with the help of your helpful guides, Dwellers.