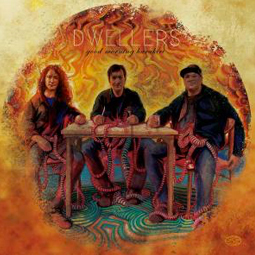 If you enjoyed Iota’s 2008 Small Stone debut, “Tales”, then you are going to dig the Hell out of Dwellers. This could be, in part, due to
the fact that it features Iota song writer/guitarist/vocalist Joey Toscano. So yes, you’ll get the heavy, fuzz-soaked, freaked-out,
psychedelic guitar assaults. But, what sets Dwellers apart from the afore mentioned band is a more focused approach to the song
writing. The songs are a bit shorter (if only slightly) and dive a little more into the psych/blues territory. You could say that Dwellers
are a bit more straight forward, but there are definitely many surprises to be had. Open tunings. Psychedelic slide guitars. Vibraphone.
Reverb-drenched fuzz. Sound good so far? We think so!

Completing the band is Zach Hatsis (drums) and Dave Jones (bass). Both of these cats were previously in doom/dark-folk outfit,
Subrosa, whose critically acclaimed album, “No Help for the Mighty Ones”, was released on the well-respected underground label,
Profound Lore. So… imagine, if you will, Hatsis’ and Jones’ supreme knack for thundering, monumental low end, mixed with
Toscano’s guitar freak fest, topped with melodic vocals, and…. well, now you’re getting the picture.

Dwellers’ full length debut, “Good Morning Harakiri”, is set to be released on Small Stone Records in March of 2012, followed by a
Spring tour and stop at SXSW.