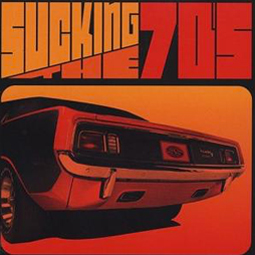 Small Stone is proud to present “Sucking the 70’s.” An aural trip down memory lane… back to the good old days when Rock & Roll actually stood for something and you could get a groupie to give you head from Cleveland all the way to the New Jersey state line. No expense was spared for this one kids. We’ve gathered 35 bands, from 6 countries, across 4 continents to revisit the songs that were probably playing on your car radio when you first got laid (or some of you were conceived). From the first blast of guitar on Five Horse Johnson’s rendition of Mountain’s “Never in my life” to the last smoldering note of Gideon Smith’s take on Steppenwolf’s “The Pusher”, “Sucking the 70’s” is a rollercoaster ride through the classics that defined a decade. Of special note are Scott Reeder’s (Kyuss, Unida) solo debut, Broadsword featuring J. Yuenger’s first released material since leaving White Zombie, and Clutch’s smoking re-invention of Jethro Tull’s “Cross Eyed Mary” as well as Spirit Caravan’s final recorded effort.” From ballads to bong hit’s this collection has everything…except Stairway. So, strap on your roller skates and dig out your lava lamps: The 70’s are back with a vengeance. Sorry, no eight track version, this baby clocks in at 156+ minutes of ass kicking rock.