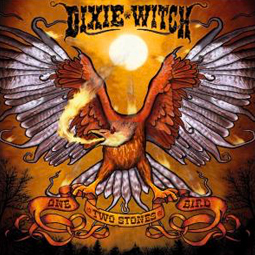 Heavier than a throng of truckers coming out of a three-hour chow-down at Hometown Buffet, this crushing juggernaut of a record is neo-Southern rock at its finest. Though comparisons to peers like Halfway to Gone and Fireball Ministry are sure to be made, there’s no question that this band of Texans is deeply entrenched in the tradition of Grand Funk Railroad and Lynyrd Skynyrd. Though produced by one-time Butthole Surfer Jefferson D. Pinkus (who lends his pipes on “Here Today Gone Tomorrow”), there’s not a trace of the Surfers’ zany or noisy tendencies here, this is straight-forward, hard-rock, the kind that shuns gimmicks and tricks of any sort. Dixie Witch makes brutal and brutally honest-barroom-brawl music. Certainly not for the faint of heart… – Big Takeover Magazine