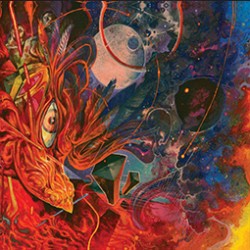 The quizzically-titled Reflections in the Bowels of a Bird arrives to further the sense of ritual in ABRAHMA’s sound. Songs heave with psychedelic fervor but also dig deeper into an influence from the early ‘90s Seattle rock scene, groups like Soundgarden and Alice in Chains. One can hear their impact in the slow roll of a song like “An Offspring to the Wolves,” while elsewhere, “Omens Pt. 3” opens up to spacious riffing and a tripped-out feel. What makes ABRAHMA work so well, though, is that no matter where they go sound-wise, they never lose sight of their songwriting, guitarist/vocalist Seb Bismuth, guitarist Nicolas Heller, bassist Guillaume Colin and drummer Benjamin Colin making memorable, structured material out of an ether of effects swirl and echo.