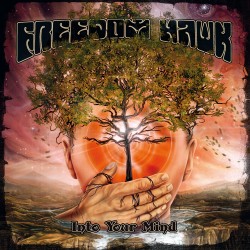 Emanating from the barrier dunes of Virginia, Freedom Hawk’s heavy riffs, rolling groove, and soulful guitar melodies to produce a sound that is distinctly their own. The trio’s brand of heavy rock capitalizes on the best of the heavy ‘70s, but presents a fuzzy take that’s modern and based around quality songwriting rather than style-over-substance retro posturing.

Guitarist / vocalist T.R. Morton, bassist Mark Cave and drummer Lenny Hines made their debut on Small Stone with 2011’s Holding On. The follow-up, and their fourth album overall, is Into Your Mind, which brings a new dynamic to their buttery fuzz with all the stomp and swagger one could ask for after Holding On, but with a more pointed delivery, assured and farther ranging than their last time out, grown more into their style than ever before.

Songs like “Journey Home”, “Lost in Space” and “The Line” push the boundaries of what Freedom Hawk have previously accomplished sonically, bringing in elements of laid back psychedelia and space rock to the band’s otherwise terrestrial song-craft. Veterans already of Roadburn in the Netherlands, Freedom Hawk return to Europe in support of Into Your Mind, playing Germany’s Freak Valley Festival prior to the release with more live dates to follow as they continue to expand their reach both in terms of music and fan-base around the world.