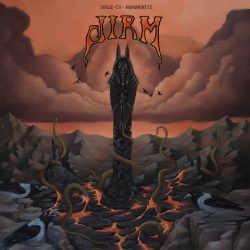 Sometimes in life you have to make a change. And sometimes you have to make a whole bunch of changes. So it is that JIRM is born and stands where once stood Jeremy Irons and the Ratgang Malibus. Having dropped the cumbersome moniker, the Swedish heavy rockers embark on a new era with Surge ex Monumentis – marked as much by a tightening of sound as name.

For their first record as JIRM, the Stockholm-based four-piece of vocalist/guitarist Karl Apelmo, guitarist Micke Pettersson, bassist Viktor Källgren and drummer Henke Persson cast off the shackles of expectation entirely. Their style is no less expansive than ever, but it’s become entirely their own, a driving mindmeld between psychedelia, classic metal, heavy rock, and individualized realms beyond. Surge ex Monumentis brims with newfound energy at the same time it benefits from the lessons JIRM have learned since first getting together in 2004 and releasing albums like Elefanta (2009), Bloom (2011) and Spirit Knife (2014).

With as much progressive force as raw sweat behind them, JIRM have never been more themselves than they are on Surge ex Monumentis, and even as they redefine who they are and what they do as a band, they remain singularly powerful in their delivery and completely unmistakable.