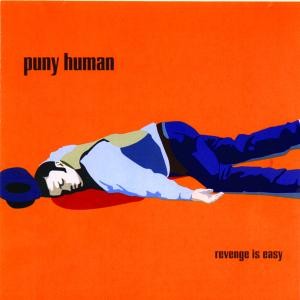 All MUSIC
Thunderous, fuzzed-out, heavy metal with a touch of grunge. A definite mix of early-’70s Black Sabbath and early Metallica (without the thrash, but with the James Hetfield vocals), with even a nod to White Zombie. Massive emphasis on a the fuzzy bass and bass drum. Lots of thud thud thud boom boom boom and plenty of tempo change-ups during the songs. The album begins with a sample of Yoda, and there’s even an Aerosmith cover as the extra song on track number 39. Forget the discordant, overly aggressive and pre-adolescent tripe that masqueraded as “metal” on the radio at the turn of the 21st century; go for something that has a bit more meat on it.


THE BOSTON PHOENIX
And the award for the best use of a Jedi master on a metal album goes to… Puny Human, who begin Revenge Is Easy (Small Stone) with an edited snippet wherein Yoda reminds us, “You must feel the Force around you…here, between you…me…the tree…the rock.” It’s all, of course, about the rock – in this case, guttural throb and boogie in the storied tradition of Sabbath, Cactus, Scissorfight, B.O.C.,, Clearlight, Blue Cheer, and Alabama Thunderpussy, with enough subterranean snarl and swagger that they haven’t had much problem covering Aerosmith or Skynyrd when the mood hits ’em. Their own songs ain’t bad neither, ‘specially the grindhouse muscle-car shitstorm “Jesus Has My Leg” (“Satan’s got my hand/Vaders in my head/ Leia’s not my friend”), “Goddess Of The Metal” (something about strippers and the apocalypse’ downright Danzig-ian), and yet ‘nother hyperdrive Star Wars nod, “Jimbo The Hutt.” And “Stink Of Two Men” has the strength of at least three. Drummer Ian Robinson has a cool day job as MTV News’ “metal correspondent”; The Puny ones have played up here almost often enough to qualify as honorary Rock City inductees, and they’ve got the Ironlung beards to prove it. Five Horse Johnson, Lamont, and Bottleneck Drag are also on the bill at The Linwood.
Carly Carioli