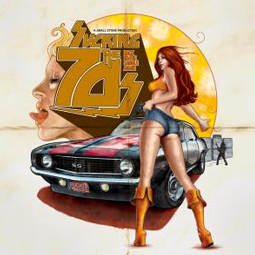 It’s time to dust off the vinyl and take your air guitar out of storage because Small Stone is proud to present “Sucking the 70’s, Back In The Saddle Again.” No expense was spared for this one kiddies. We scoured several continents to find the best and most ass kicking bands to pay homage to the greatest decade that rock and roll has ever known.

Let’s get this straight right up front, these aren’t covers. We sifted through a lot of bands simply covering their favorite jams and you won’t find any of them here. In the end we cut this baby off with 31 tracks and a waiting list a mile long to get in. What you will find on “Sucking the 70’s” are some of the best and most true to life rawk bands of the 21st century lovingly re-working, re-interpreting, and in some cases re-defining the music that first inspired them to make music in the first place.

From the ferocious opening blast of Sasquatch’s incredible revamping of Grand Funk Railroad’s classic “Are You Ready” through the final breaths of Valis’ psychedelic re-invention of Gary Wright’s �Dream Weaver�, �Sucking the 70�s� is a rollercoaster ride through the classics that defined a decade. It�s an aural trip down memory lane back to the good old days when Rock & Roll actually stood for something. These two discs feature Small Stone alumni both past and present as well as some of our favorite acts ever. And whatever you do don�t miss out on the incredible first ever recordings of Five Horse Johnson with Clutch. It is unbelieveable.

So, break out your lava lamps and lay some carpet down in the back of your SUV because the 70�s are back with a vengeance. This is an incredibly limited pressing and when it�s gone it�s gone, so you�d better get it while you can. Operators are standing by. Eight track version not available. Stairway not included. Void in Kansas, Chicago & where ever the hell the Bay City Roller’s are from.