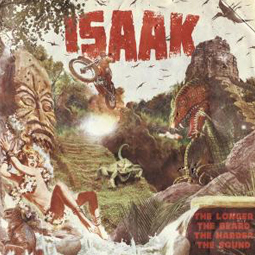 Long regarded as a rising force within Italy’s underground stoner rock scene, where they were previously known as Gandhi’s Gunn, Genoa’s freshly renamed Isaak is now preparing to spread their bruising bombast across the world with the help of Detroit, MI’s Small Stone Records.

The quartet, which is comprised of vocalist Hobo, guitarist Scazzi, bassist Maso and drummer Andre, was first inspired into action by the legendary works of the major names of American stoner rock – namely Corrosion of Conformity, Fu Manchu and Clutch.

And yet both their first LP, 2010’s Thirtyeahs (which was issued in a limited run of 300, hand-numbered vinyl + CD packages by Taxi Driver Records), and its 2012 sophomore follow-up, The Longer The Beard, The Harder The Sound, clearly revealed a band ready to transcending these core influences and explore more visionary and psychedelic territories.

We’re talking…churning riffs, elephantine grooves and raging growls, seasoned to perfection with lysergic flights, epic jams and even mesmerizing quieter passages, before being served al dente for consumption by our most discerning stoner rock patrons.

Come October 2012 the Gandhi’s Gunn name was retired and Isaak born, just in time for the band’s signing with Small Stone, which is now happy to announce the imminent global reissue of The Longer The Beard, The Harder The Sound, in March 2013.