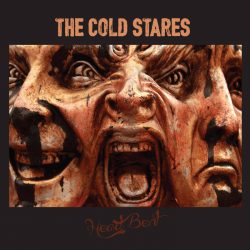 Formed in 2008 after the duo had spent a number of years in other bands, Chris Tapp and Brian Mullins got together for the sole reason to jam. No preconceived notions; just do what comes naturally. The result is a sonically and emotionally weighted, story-based brand of rock sung directly from the soul.

Chris’ unique guitar rig and Brian’s giant bass drum provide a visual and sonic landscape for the two to travel on different paths than other acts. You may find yourself looking for another member behind the curtains, but nope. It’s just the two of them.

And their success has come from hard work and perseverance. From keeping everything in-house: Booking, promotion, recording and merchandise design, Chris and Brian have handled it at all themselves.

Fans have seen The Cold Stares in venues like Pianos in New York City and the Viper Room in Hollywood, and at festivals like The Ride, Copperhead, Handy Bluesfest, with acts like Rival Sons, Big Head Todd and Spoon among many others.

Following up with their two successful EPs recorded with Mark Needham , their new album, Head Bent, will be released in May 2017 on Small Stone Records.