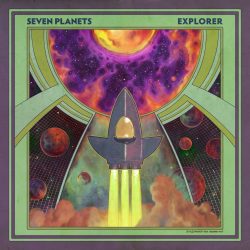 West Virginia-based heavy instrumentalists Seven Planets will release their third full-length, Explorer, in early 2020 through Detroit’s Small Stone Records. Drawing on classic metal, heavy boogie, and blues rock, the group formed in 2007 and consists of guitarists Leonard Hanks and Jim Way, bassist Mike Williams and drummer Ben Pitt, all of whom have played in bands together in different configurations for over 25 years. Its groove-anchored sound has drawn comparisons to Brant Bjork and Clutch-offshoot The Bakerton Group with The Obelisk noting “the instrumental chemistry and stylistic foundation… fuse the varying sides of their sound into a cohesive funky, heavy psychedelic whole, entirely their own.”

Written and recorded over a period of personal difficulties and individual strife for the four band members, Explorer captures a sense of escapist freedom in its deep grooves, burly riffs, and expansive atmosphere, which further illustrates what Heavy Planet stated in its review of the band’s self-titled 2012 LP: “Seven Planets take you on an amazing journey into another cosmic dimension.”

For fans of: Clutch, Brant Bjork, Karma to Burn.