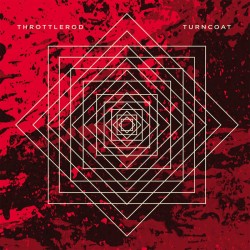 Richmond, Virginia’s Throttlerod have always had a knack for surprising, and their fourth album, Turncoat, is no exception.

After making the transition from four-piece to trio, the outfit offered up their third full-length, Pig Charmer, in 2009, and took a left turn from their earlier, riffier vibes to blistering and aggressive noise rock. Like all their prior work, it was produced by Andrew Schneider, and had a sharpness in its chug that, while it still grooved, was clearly looking to accomplish something apart from the band’s earlier three LPs: 2000’s Eastbound and Down (on Underdogma), 2003’s Hell and High Water, and 2006’s Nail, as well their quiet, semi-unplugged 2004 EP, Starve the Dead.

While the biggest change that Pig Charmer brought about was in lineup – guitarist/vocalist Matt Whitehead and drummer Kevin White bringing in Schneider as bassist/vocalist – Turncoat goes even further. Instead of going back to record as they always had, the band hooked up with J. Robbins (Clutch, Coliseum, Against Me!) to lay down Turncoat’s 12 tracks, and the result of the new collaboration is that the album not only follows-up on the aggro promise of Pig Charmer, but builds it outward, in a way that’s more melodically resonant and as much about emotional expression as sonic impact.

Dedicated to the memory of Puny Human vocalist Jim Starace, who passed away in 2012 and who had guested on Nail, Turncoat is an important step forward for the band, but much more, it’s a killer rock album, and whatever Throttlerod go through from one record to the next, and whoever happens to be sitting at the helm, that’s the underlying thread. It just wouldn’t be Throttlerod if it didn’t kick ass… and offer a surprise or two along the way.

Dedicated to the memory of Jim Starace.