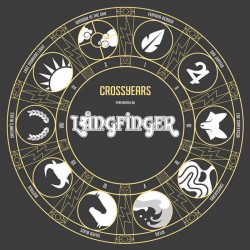 A kick-ass power trio is quite probably the perfect rock formation. If there aren’t that many trios around, that’s because it’s a hard thing to pull off: with just three people having to nail the rhythmic fusion of bass and drums, the wild colours of guitar and the soul-grabbing focus of the human voice, there can be no passengers aboard. Extraordinary chemistry is essential. Everyone has to be right on it, and locked in. Which is why lots of trios fail, or cop out and recruit extras.

Långfinger, from the fertile rock ‘n’ roll city of Gothenburg, are masters of the art. They’ve been playing together since they were in their early teens, and their imminent third album, called ‘Crossyears’, is both the thrilling culmination of their collective endeavour, and a rumination on it – on how Time has shaped them and brought them to this point.

Within its hard-hitting grooves, the interlocking of Långfinger’s three disparate characters – Kalle, the unflappable, precision axeman; Jesper, the athletic sticksman battering out physical revenge on his kit; and Victor, the intense, exploratory spirit, bridging thundering bass and howling exorcism – is a magical proposition.

For any fan of the many ages of heavy rock, ‘Crossyears’ really is as good as it gets.